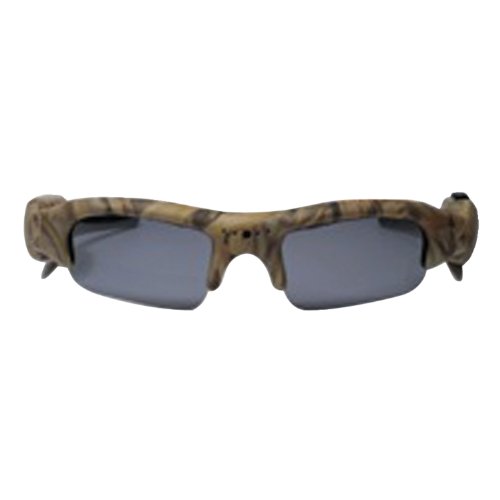 The POV ACG27CA is a unique wearable 720p HD video camera and polarized sunglass combination with webcam capability. The camouflage matte sunglasses are sleek and stylish weighing only 1.7 ounces. A 2-megapixel pinhole CMOS video camera is housed in the sunglass frame and features a 72-degree wide-angle lens. Video is recorded at 30 frames per second in 720p HD video format with a resolution of 1280 x 720. The ACG27CA also records audio with the built in microphone. These glasses include three interchangeable lenses – polarized grey, yellow and clear. A micro SD slot can add up to 32GB of memory (card Not included). The built-in lithium-ion polymer battery will provide between 1.5 hours of recording time. To view your action, simply plug the unit into a computer with a USB (cable included). It’s as simple as that – no additional software or drivers needed. These glasses can even be used as a webcam! The ACG27CA includes a case, a charger, three lenses, lens cleaning cloth and USB cord. They are water and sweat resistant.