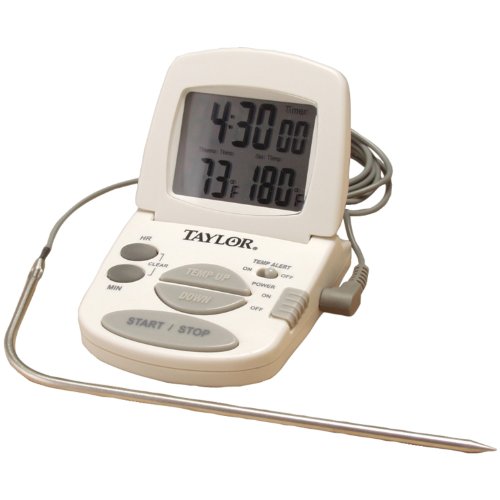 Ever wonder why it might take longer to cook or bake an item than the recipe states? Well, it’s probably because you’re opening the door too often to check the temperature. With the Taylor 1470 Digital Cooking Thermometer and Timer with Probe you can monitor the exact temperature of meats and poultry without opening your oven door. This Taylor cooking timer/thermometer automatically signals the end of preset cooking time, or when food has reached the desired internal temperature. Range: 32-392 degrees F. Has an easy-to-read display that shows both the target temperature and the current temperature at the same time. The durable stainless steel food probe is connected by on a high temp and flexible silicone cord. On-off switch extends battery life. Magnetic back/stand design folds for compact storage. Battery included. Imported. 5-inches H x 3-inches W. Extra probes also sold Taylor #1470NRP.Opening the oven to check on a food’s temperature means wasting the cook’s time and losing oven temperature and moisture–not to mention a face full of steam. This thermometer prevents those problems. Insert the instrument’s 6-inch stainless-steel probe into a roast beef or turkey and monitor the time and temperature (from 32 to 392 degrees F) on the thermometer’s large digital display, which connects to the probe with a 4-foot cord. The control panel sets cooking time and temperature, and an alarm sounds when either is reached. Fully opened, the thermometer/timer is 5 inches high, but it folds flat for compact storage. Magnets on the back permit it to be temporarily mounted on a metal surface. –Fred Brack