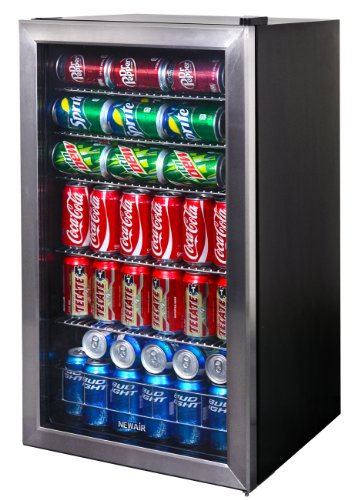 With the NewAir AB-1200 126 can beverage cooler, you’ll be able to keep a large supply of your favorite soda, beer, water or other beverages chilled and ready to drink. Whether you’re preparing for a party, or just want to stock up in the rec room, the AB-1200 has plenty of room, with five removable racks and a spacious storage bin that’s perfect for oversized bottles or cartons. This compressor cooling system chills down to 34 degrees Fahrenheit, with seven thermostat settings so you can select the perfect chilly temperature for your drinks. This freestanding unit is both durable and attractive, featuring a black and stainless steel finish that is sure to enhance any decor. For your home bar, man cave, office break room or dorm, the NewAir AB-1200 beverage cooler the answer to all your refreshment needs.