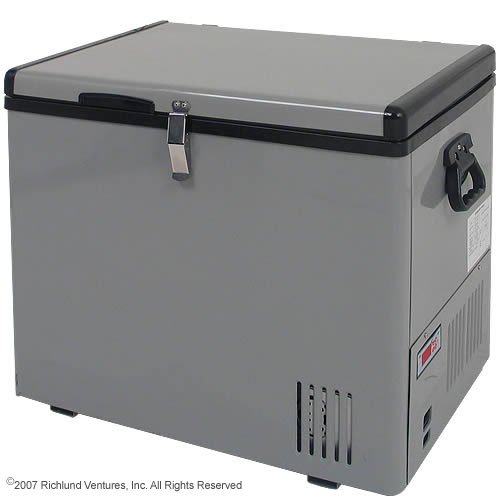 Keep your food cold while traveling with this deluxe EdgeStar FP430 portable refrigerator freezer. This powerful unit packs the strength and insulation of a home freezer into a compact and rugged appliance. For ultimate portability, this unit runs off standard household voltage, or easily connects to the cigarette lighter outlet in your car. Forget about thermoelectric portable coolers – this portable refrigerator freezer features a full range digital thermostat that is adjustable from -8°F to 50°F and it will hold a stable temperature under most conditions. Plus, the insulated metal walls will keep your food cold for hours, even without electricity! If you’re in a hurry to freeze something, press the “Fast Freeze” button to rapidly cool the unit to -8°F and maintain this freezing temperature. With side-grip comfort handles for easy transport, and two removable wire baskets for efficient storage, this unit is great for boaters, campers, hunters, medical transportation/storage, recreational vehicles, cabins and all your outdoor applications.