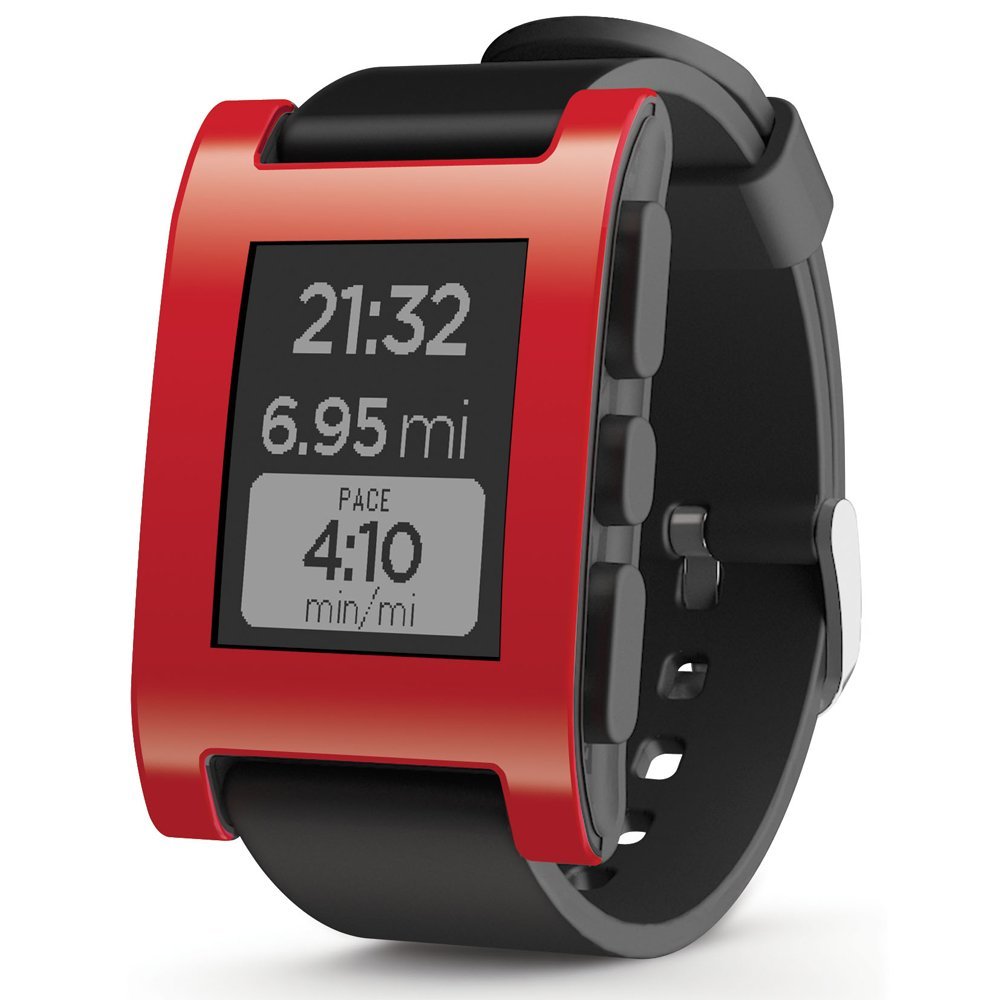 Pebble Smartwatch for iPhone and Android

Pebble Smartwatch for iPhone and Android 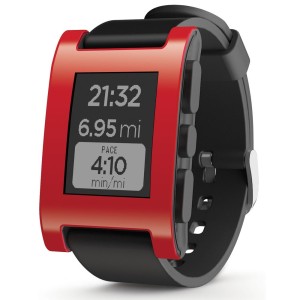 I love my Pebble, October 25, 2013
By
RWm “Rick” (Boston, MA) – See all my reviews
This review is from: Pebble Smartwatch for iPhone and Android (Black) (Wireless Phone Accessory)
This watch is great! I love being able to try different watch faces every day. There is an app so that I can even create my own watch face. So I did. It was easy to load it on and use it. I added it to the others on my Pebble.I’m hard of hearing. Normally I need to have my phone on LOUD to hear it even with my hearing aids and sometimes I don’t feel the vibrating alert on my phone. Other times I have my phone in the bedroom because I don’t have it with me. Nevertheless, my Pebble will vibrate and tell me who is calling. Even 30 feet away. It is totally awesome. If I want to ignore the call I just click the button on the watch.

For those of you that don’t like the Pebble because they think that it looks cheap. Prior to the Pebble, all of my watches (except the one that I use to work in the yard) were fancy 0+. I now wear my Pebble everywhere. I meet with executives, and often I’ll show it to them and next thing they want to know what it costs and where to get it.

I also wear my Pebble running and occasionally in the shower or bath. Never a problem.

I added the Skinomi Skin to the watch face to protect it.

The only drawback is that I’m 55 and find it difficult to read the text messages without my readers on. I wish that I could increase the font size of the text. For this reason, and only this, I give it 4 stars.

November 16, 2014
Well, it has been over a year now. I still wear my Pebble every day. I still keep with the basic apps that came with it. I did add an app that gives me the weather but it basically tells me what I know. It’s cold outside…

People still ask me about it. I teach at a local university and the students will ask. They seem to like it but I think that many of them are looking for something more sophisticated than what I want.

My big complaint remains that when I receive texts or emails the font size is too small for the body of the text. If someone could let me know of an app that gives me more flexibility on font sizes and messaging controls I would greatly appreciate it.

Finally, I am in the health care industry. I strongly believe that health monitoring with small gadgets like watches will become the norm for people with chronic illnesses like heart disease and diabetes. However, the quality hurdle for watches like this will be very high. They must be very accurate. They will also lead to fewer emergencies (we’ll catch them sooner) and better patient compliance with medical orders. These devises may greatly improve the quality of life for those that are chronically ill and even extend their lives.

Help other customers find the most helpful reviews

<span
Was this review helpful to you?

02/23/2014 update:
-I’ve had my first scratch on the screen as I walked through a door, due to accidentally rubbing my arm against the metal door frame. Minor scratch, can only see it in certain angles.
-No changes to battery life from previous updates
-I currently have installed the SDK 2.0.1 firmware, which works great, but caused another problem for me. I installed LetsMuv, a fitness tracking app, which works great now with 2.0.1, but the built-in app watchface is not customizable, so I’ve been switching between the LetsMuv app and my custom watchface. More of an app issue, not Pebble’s fault :). On that fitness note, now my watch can track my sleep cycle, steps taken (not 100% accurate, but fairly accurate), etc. With this particular app, it syncs with my phone and lets me view that data online.
-I have considered buying a second watch to connect to my work cell phone. Pebble Steel looks nice.
-I still really appreciate the weight of this watch, it does not feel like I’m wearing a watch.

*******************************************
11/22/2013 update:
-I ended up removing the screen protector because I installed it poorly and it was peeling around the edges, so I’ve been on a “bare screen” for ~2 months. I never remove my Pebble from my wrist, except for when I’m charging it, and surprisingly I haven’t had a single scratch on it.
-The battery is still lasting an average of ~8 days.
-Pebble released SDK 2.0 beta (and the official release will happen before year end). What this means: more apps, better apps. SDK 2.0 brings lots of new functionality, and the one end users will notice the most is the unlocking of accelerometers (think apps for pedometers, gesture control/activation, etc).

Notice: I bought it at Best Buy, left the same review there.

Have had my pebble for just over one week. I will break up the review so it’s easier to follow and will update if anything changes for the better or worse.

Overall:
It’s a great smartwatch! I showed it to some of my geeky friends who criticized it for not doing more, but you have to understand what you’re buying. I’ve been keeping up with this phone for about a year so I knew what I was getting.

Features:
First of all, this is a smart watch, not a smartphone replacement. It does the ‘watch’ job beautifully, with customizable watch faces (switching between watchfaces is as easy as pushing a button). Bluetooth connectivity is easy to setup, and I usually have had no problems keeping it connected to my phone. Waterproof (tested in the shower so far). Screen is easy to see, if it’s too dark (at night), a shake of your arm will temporarily turn on the back light. Currently use of the accelerometer and magnetometer is limited until the full SDK library/functionality is made available, and I’m looking forward to that. Notifications on your wrist is awesome (you can choose which apps to get notifications for with ‘pebble notify’).

Design:
I got the black version from Best Buy (wife did as well). It’s pretty nice looking, not too big on our wrists (maybe a bit big for my wife, but not enough for her to care). There are good screen protectors available online, so we installed those (already cut to the shape of the watch) before we tested the manufacturer’s claim of “scratch resistant lens”. It’s very lightweight, which is a watch requirement for me. My wife changed the watch band on her watch while we were at Target with no issues. Buttons are initially hard to push, but once you break them in they work fine.

Battery:
Initially I only charged it for 15 minutes out of the box before I decided I had to play with it. It came partially charged from the factory, and the 15 minutes extra made the battery go for ~2 days. After that full charge, I went 8 days without having to charge again. No noticeable changes on my phone’s battery either for keeping the bluetooth on at all times (HTC One X, jelly bean).

Apps:
There are several cool apps (cooler ones to come once programmers can use the accelerometers). I used the watchface generator online (very easy to use) to create my own watchface with my university logo (great for bragging at work). It comes built in with an alarm, which I use, I also added on Glance (shows a count of unread SMS, email, missed calls, current weather), a monthly view calendar, a stopwatch (not sure why it wasn’t built in), pebble dialer (for enhanced call notification, accept/dismiss), and pebble tasker (read more below). It does also come built in with a music control app that works with several apps on your phone (pandora, google play music, etc), allowing you to skip, go back, pause/play. We also used runkeeper and it displayed the activity information on our watch automatically (pace, distance, time) without us…

Help other customers find the most helpful reviews

<span
Was this review helpful to you? 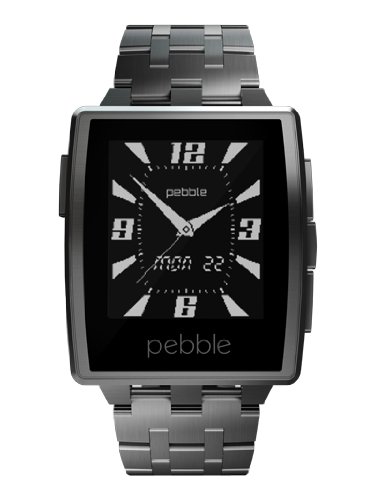