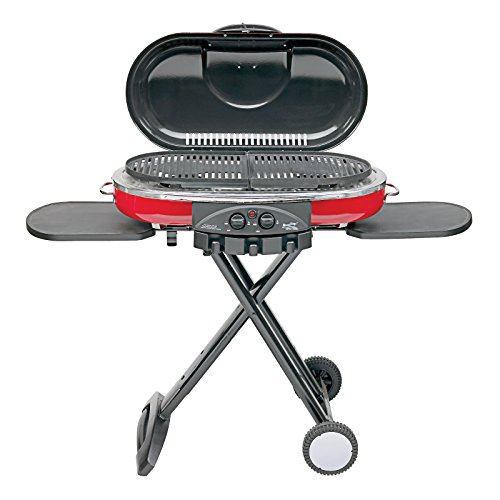 Get the Coleman RoadTrip LXE Grill and stop manhandling those heavy, bulky backyard beasts. It’s easy to tote around and set up. Just fold it up, roll it with one hand to your favorite cooking spot and set it up in a matter of seconds with the lift and lock system. The grill comes equipped with durable cast-iron grilling surfaces. When you’re ready to start grilling on your Coleman RoadTrip LXE Grill, push a button to ignite the InstaStartTM matchless lighting system. Cook for more than an hour on one propane cylinder with 20,000 BTUs of power on 285 sq. in. (1838.7 sq. cm) of cooking surface. It’s perfect for BBQs, picnics, tailgating, camping or a night on the patio. When you’re ready to leave, it folds down small enough to fit in the back of most car trunks. 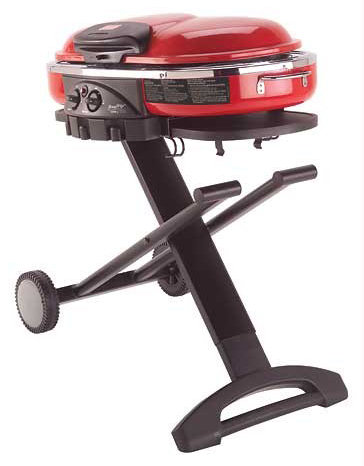 Take the convenience, efficiency, and versatility of the household barbecue grill on the road this summer with the clever Roadtrip Grill LXE from Coleman. Whereas other portable liquid propane grills are petite and tabletop in design, the Roadtrip LXE is a full-size grill with collapsible scissor legs for countertops or travel. This 36-inch grill features 285 square inches of cooking space, ideal for toting to the beach or just into the driveway a small block party. Two 10,000 BTU burners cook meats evenly. Independent control knobs allow users to adjust temperatures on either burner for flexibility.

The grill comes equipped with two warp-resistant cast-iron grill grates, coated in porcelain for cleaning convenience. Two side tables attach to the grill’s sides for extra preparation space and store neatly under the grill. A grease tray catches drippings, sliding out for cleaning. The grill is outfitted with an Instastart electronic ignition. The grill affixes to a standard 16.4-ounce disposable propane cylinder, or can be hooked up to a 20-pound tank with an additional accessory purchase. Burning on high with a propane cylinder, the grill operates for 2.1 hours, while low settings allow operation for up to 4.5 hours. A heavy-duty vitreous lid cased in painted steel contains flames to reduce hazard while barring access to bugs and debris. The collapsible legs feature two wheels on one end and a wide handle on the other for towing. To clean the cooking surface, use mild detergents and avoid steel wool. Coleman offers several interchangeable Roadtrip cooking surfaces, including a stovetop and griddle, for separate purchase. This grill requires assembly. Coleman offers a limited five-year warranty for this item. Collapsed, the grill measures 36 by 22 by 13 inches with a shipping weight of 60 pounds. Propane is not included. 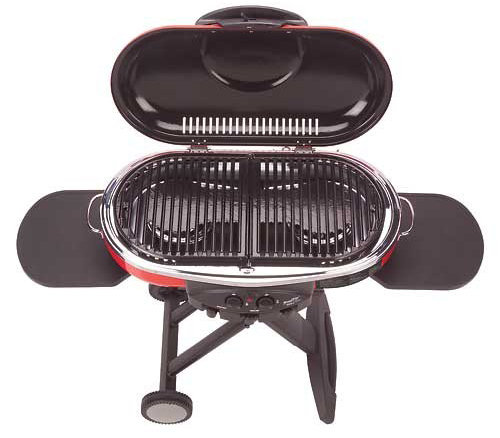