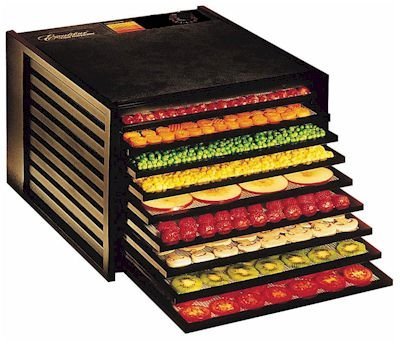 Dehydration is the healthiest, easiest, and most economical way to preserve foods. Load the trays and set the temperature, the Excalibur dries the contents of all trays evenly so everything’s done at once. Dehydration concentrates the natural flavor, sweetness, and aromas of your food. Leaving you with a flavor that’s far healthier than high-fat snacks and high-sugar candies that are filled with chemical preservatives. The Excalibur 9-Tray Economy Dehydrator provides 15 square feet of drying space making this the biggest and best there is! Ideal for large families, large gardens, craftspeople, and sportsmen. Includes flexible polyscreen tray inserts to prevent foods from sticking to trays, 7 inch fan, built-in on/off switch, and adjustable thermostat. Do not was the herbs before drying. Herbs must be dried before adding it into the dehydrator. Humidity and herb size plays a role in determining the drying time.